Amazon will kick off its fourth consecutive year of streaming Thursday Night Football games later this week as Tampa Bay visits Chicago amid an unusual NFL season with the ongoing pandemic. Prime members will have access to a couple new features while watching the games.

Also new this year is more NFL content on Twitch, including “The NFL Comment Box” on Monday’s at 11 a.m. PT, “The NFL Machine” on Wednesday’s at 3 p.m. PT.

Amazon is also adding former NFL wide receiver Andrew Hawkins to its “NFL Next” show that debuted last season on Prime Video, with Super Bowl champ Chris Long, NFL Network’s Kay Adams, and Next Gen Stats Analyst James Koh returning. The show is moving from a live stream before Thursday’s game to an on-demand release on Tuesday evening at 5 p.m. PT. Hawkins is also joining Cari Champion for a new livestream show “NFL Next Live” on Twitch every Thursday, and a live simulcast of the “Scout’s Feed” will be available to fans.

Amazon inked a multi-year streaming agreement with the NFL earlier this year to renew its partnership, which brings 11 games broadcast by FOX on television to an audience watching on Prime Video and Amazon-owned Twitch across a variety of sites, apps and devices.

This year Amazon will exclusively stream one game globally on Prime Video and Twitch later this season. “TNF” games are also livestreamed on NFL, FOX and FOX Deportes digital properties, as well as team platforms and Yahoo Sports.

The games are available to 150 million paid Prime members in more than 200 countries. Amazon took over streaming rights for “TNF” from Twitter in 2017.

Amazon this season is also bringing back gamification features for its Twitch streams, in addition to co-streams that add live dialogue from popular Twitch users.

The average audience for “TNF” in 2019 was 15.4 million viewers. Digital streaming across Prime Video, Twitch, NFL digital, FOX Sports digital and Verizon Media mobile properties surpassed an average minute audience of over 1 million — up 43% from 2018.

Streaming still makes up a small fraction of the total audience watching live football, but there is surely a “migration” of sports fandom shifting to digital, said Charlie Neiman, head of sports partnerships for Prime Video.

“There’s a desire for a next-generation experience in terms of optionality and convenience,” he said. “A lot of what we think about is how to deliver that and how to offer that.”

Earlier this year Amazon inked a deal with the Seattle Sounders FC to be the exclusive digital streaming platform for the professional soccer team’s games. It also partnered with the New York Yankees to stream 21 games this season and has a Premier League streaming deal.

“At a high level, we’re thinking about how we add to the value of a Prime membership,” Neiman said.

Amazon also hosts the Amazon Original documentary series “All or Nothing,” produced by NFL Films, exclusively on Prime Video. Season five premiered in February with “All or Nothing: The Philadelphia Eagles.”

Amazon and the NFL have a separate deal for Amazon Web Services, which powers Next Gen Stats. AWS and the NFL debuted six new insights into player and team performance this season. In December at AWS re:Invent they announced a new partnership to learn more about what contributes to player injuries — including game rules, equipment, rehab, and recovery strategies — and how to prevent them.

Fellow Seattle-area tech giant Microsoft has not invested in live sports streaming deals, but it did ink a cloud partnership with the NBA this year and rolled out a virtual fan experience via Microsoft Teams during the playoffs.

Here’s a look at the Thursday Night Football schedule this season. 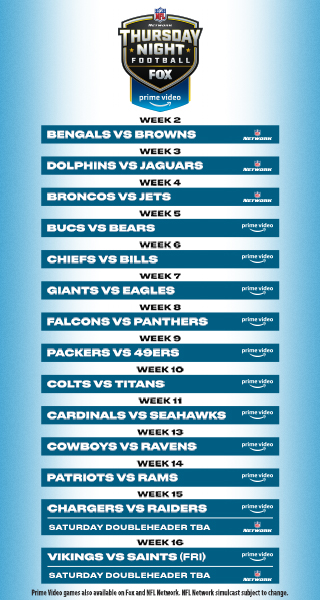