The NBA is getting help from Microsoft to improve the fan experience as the league embarks on an unprecedented shortened season amid the pandemic.

The two organizations, which announced a multiyear cloud partnership in April, will debut virtual viewing technology powered by Microsoft’s Teams collaboration software when the season begins July 30 near Orlando, Fla.

The NBA is installing 17-foot video boards surrounding the courts where games will be held with no fans due to COVID-19. More than 300 fans for each game will appear on the boards and interact with each other using the new Microsoft Teams “Together” mode, a feature for video meetings that places participants against a shared virtual background, removing individual backdrops in an effort to make it easier to pick up on non-verbal cues and to interact more like in real life.

The tech “gives participating fans the feeling of sitting next to one another at a live game without leaving the comfort and safety of their homes, while players experience their energy and support in-venue,” according to a press release.

FOX is doing something similar for Major League Baseball broadcasts, given that no fans are allowed at baseball games, either — though it is using avatars instead of real people. 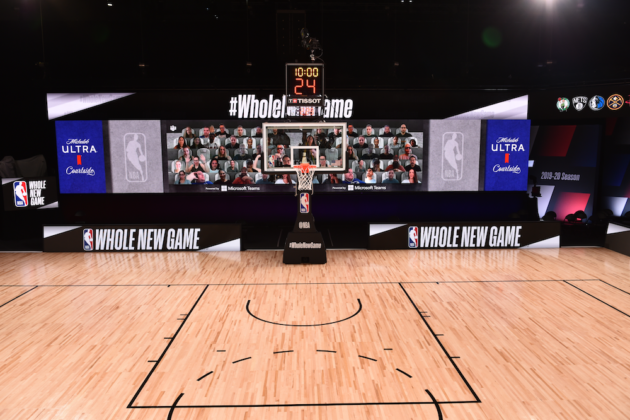 Microsoft has seen a big spike in Teams usage due to the work-from-home mandates during the health crisis. The new deal with the NBA shows how the software can be used beyond the office.

Will your meeting suck less in a virtual auditorium? Microsoft unveils ‘Together’ mode for Teams

Microsoft in June made Teams available for personal use with friends and family.

Microsoft’s deal with the NBA includes the creation of a new direct-to-consumer platform that runs on the company’s cloud computing technology. Microsoft will also become the “Official Artificial Intelligence Partner” and an “Official Cloud and Laptop Partner” for the NBA, WNBA, NBA G League, and USA Basketball beginning with the 2020-21 NBA season.

The deal is another key sports-related partnership for Microsoft, which has worked closely with the NFL since 2013. Microsoft extended its NFL deal earlier this year. NFL players and coaches will continue using Microsoft Surface tablets on the sidelines during games; teams and NFL staff will also use Teams. The Surface tablet was featured in Microsoft’s Super Bowl ad this past January.

The NBA halted play on March 11 due to the global pandemic. The league invited 22 teams to its “bubble” at the Walt Disney World Resort, where players are following strict safety guidelines both on and off the court to prevent the spread of COVID-19. Many say it’s “the most ambitious undertaking in league history,” The New York Times reported.

The NBA also announced Friday that it will use more than 30 cameras, including robotic devices, that are repositioned closer to the court where fans normally sit. It is also using microphones around the court to pick up sneaker squeaks and ball bounces, and using in-arena DJs and announcers to help simulate a traditional game experience.

The league is also partnering with Twitter, TikTok, and Snapchat on various tech-enabled fan experiences such as virtual cheering and augmented reality viewing.