“We did it Seattle!”

The sellout crowd of 17,151 roared as Seattle Kraken CEO Tod Leiweke welcomed the first packed house for a hockey game at Seattle’s new Climate Pledge Arena on Saturday by marking the achievement of getting the place built and landing an NHL team.

Seattle definitely turned out to celebrate. 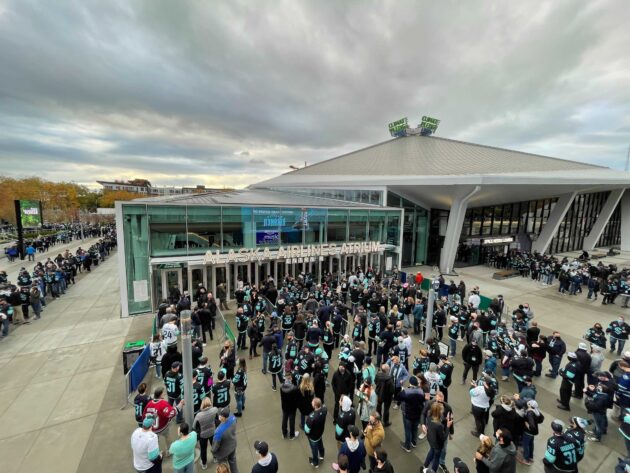 Decked out in Kraken team jerseys, fans swarmed Seattle’s Lower Queen Anne neighborhood and the site of the new $1 billion sports and entertainment venue. The roof may have looked the same to fans seeing the arena for the first time, but everything else has changed considerably in the past three years.

Amazon — headquartered just down the street — bought the naming rights and put Climate Pledge on the building, and the tech giant’s touches are all over the inside, from its cashierless “Just Walk Out” technology in select food stores to Amazon Music sponsoring the pre-game warm-up tunes.

All over the arena, fans snapped pictures and snagged merchandise. They tried new technology and they tried to will the team to a win. But the crowd had to leave its new house without a victory as the Vancouver Canucks beat the Kraken 4-2.

Keep reading for a sampling of some of what we saw, and check out our earlier sneak peek of the arena.

Food and beverage lines seemed to be moving relatively quickly throughout the arena, and we didn’t see any lines coming out of restrooms. The biggest attraction was anywhere that was selling Kraken merchandise.

Fans lined up at kiosks throughout the arena to grab jerseys, hats, pucks, and more. And at The Lair, the main store for gear in Climate Pledge, a long line to get in snaked down the concourse.

A shorter line to get outfitted was set aside for fans who were picking up merchandise that they ordered through the Kraken app. The app features the ability to buy stuff from your seat and have it delivered to a pickup spot nearby.

The Kraken broke jersey sales records last month, before the team even played a single game.

And there were no lines at four stores that are equipped with Amazon’s “Just Walk Out” cashierless technology. It’s the same experience found in Amazon Go convenience stores and the company’s Fresh grocery stores.

We had a chance to test out the experience, and it worked seamlessly. Other fans found it similarly easy and convenient, though the $16 price tag for beer wasn’t as exciting.

The use of tech to speed shopping and avoid long lines is a key part of the tech-enhanced experience that Kraken and Climate Pledge Arena representatives have been promising for years at the redeveloped KeyArena site.

Oak View Group CEO Tim Leiweke, whose firm led the arena redevelopment, told GeekWire the Kraken franchise has a “fantastic partnership” with Amazon. The company’s cloud division Amazon Web Services also made an appearance, powering the “Stat of the Game.” 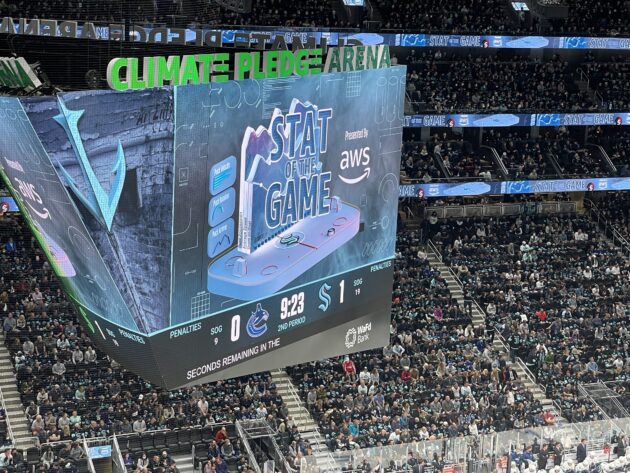 The Kraken and Canucks took the ice for a warm-up shoot-around 15 minutes before the start of the game. The music playing during that period, to energize the players and the crowd, was “presented by Amazon Music.”

And after it was over, the arena announcer told the crowd that if they liked what they heard, they could hear it again at home — if they have an Amazon smart speaker — by saying, “Alexa, play Kraken warmup music.”

Speaking of Amazon — the tech giant’s new CEO, Andy Jassy, is a part-owner of the Kraken and was at the game.

Pre-game at the arena…new era of NHL hockey in Seattle about to begin. Go Kraken! #seakraken pic.twitter.com/QAWvwLCpdh

The large living wall full of ferns and other plants at Climate Pledge proved to be a popular spot for fans taking pictures. We spotted a lot of them grabbing selfies with the greenery as a backdrop.

The wall was built with the help of Amazon, which has just such a feature in the Spheres on its headquarters campus. The arena wall is interspersed with video screens promoting various sustainable technologies and more. 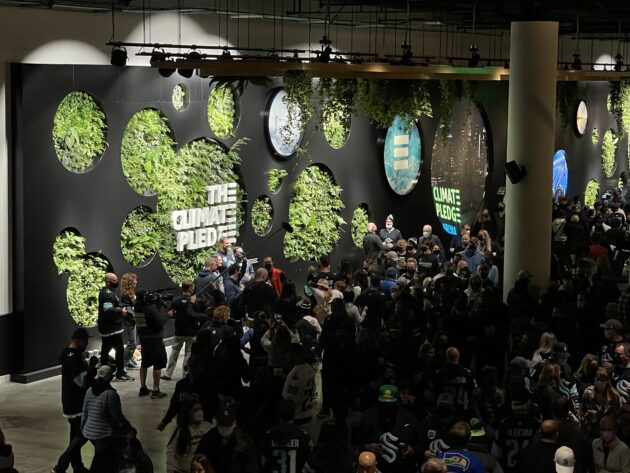 NHL Commissioner Gary Bettman was in attendance on Saturday and we asked him about the arena’s name.

.@NHL commissioner Gary Bettman on Amazon naming #SeaKraken arena @climatearena for @climatepledge: "At some moment, every time somebody comes in this building, they will think about the environment. From a consciousness-raising standpoint, that is spectacular." pic.twitter.com/jnnxRrzxjG

Monorail in the mix

The Seattle Center Monorail was built in 1962 to showcase the future of transportation for the Century 21 World’s Fair. The elevated train travels all of .9 miles, but the Kraken are hoping it goes the distance for fans looking for another way to avoid parking headaches in the Lower Queen Anne neighborhood.

The team’s ownership group committed $7 million to Monorail upgrades in February 2020 NHL and is subsidizing all home game season tickets and single game tickets on public transit, via ORCA.

The Monorail platform at Westlake was packed with people wearing Kraken gear 2 1/2 hours before game time on Saturday. Fans could access the Monorail for free with their game ticket on their phones. A one-way ticket cost GeekWire $3.

Season ticket holders Matt and Hanna from Seattle parked in the University District and rode the Link light rail downtown and were riding the Monorail to Seattle Center for the first time in about four years.

“We wanted to see if this would work and then adjust accordingly,” Matt said, adding that they wouldn’t be opposed to driving, perhaps on a night that wasn’t as crazy as opening night.

Scott, a season ticket holder from Tacoma, drove to the Angle Lake light rail station in SeaTac and rode the train to Westlake. The train ride was 45 minutes. The Monorail ride to Seattle Center is 90 seconds.

“The area hasn’t had sports on a regular basis so let’s see what the residents think about parking. A lot has changed,” he said of Lower Queen Anne and why driving wasn’t his first choice.

Leiweke has previously talked about his appreciation for alternative transportation options — including drones.

We ran into Leiweke on the concourse before the game Saturday, and asked for an update on transporting fans to the arena via drones.

A few seconds of Pearl Jam’s “Even Flow” played at the 15:02 mark of the first period during a face-off.

The first goal by the Kraken with just a few seconds left in the first period brought a bit of Nirvana’s “Lithium,” but with a “Let’s go Kraken” lyrical twist.

Seattle-area tech companies including Smartsheet and PitchBook had their logos prominently displayed on the rink and during in-game video promotions. Both companies are among the team’s partners.

The night brought out some of the biggest sports stars and entertainers in Seattle history.

Four-time WNBA champion Sue Bird was there waving a towel to rile up the crowd. Seattle Seahawks stars Bobby Wagner and D.K. Metcalf did the same, and their injured quarterback, Russell Wilson, was spotted in the crowd and on the jumbotron with Grammy-winning wife Ciara.

Ann Wilson from the rock band Heart sang the National Anthem, and hip hop star Macklemore made an appearance.

Seattle Sonics legends Shawn Kemp and Gary Payton also played a part under the roof where they starred for the dearly departed NBA team. Kemp was in the building and Payton gave a shoutout on the big screen. 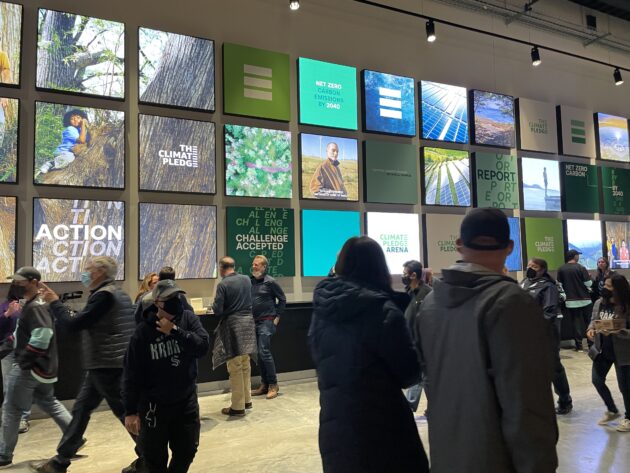 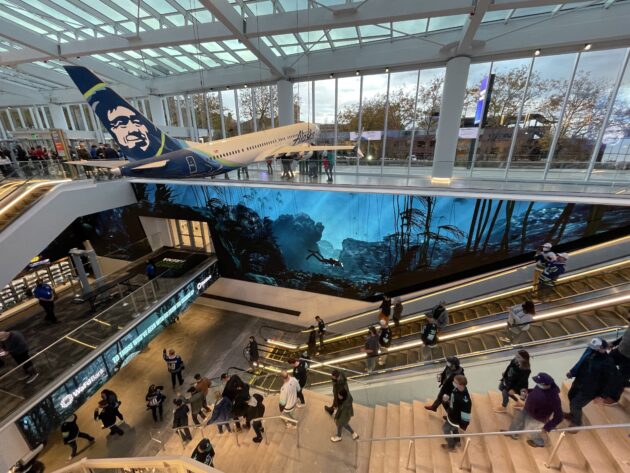 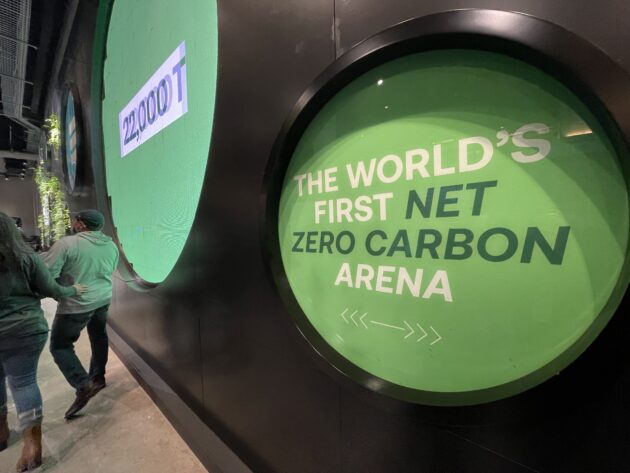 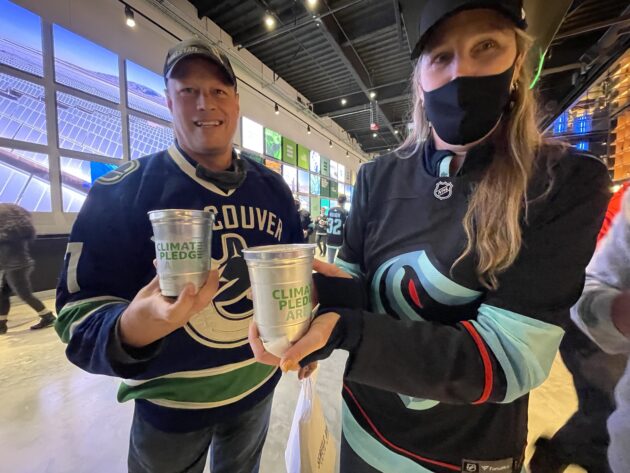